Harrogateâs unsung hospitality heroes were rewarded for their excellence and commitment on Monday night (11th June) during a glittering gala dinner at the Harrogate International Centreâs Royal Hall.

Now in their fourth year, the sell-out awards evening, which is organised by Destination Harrogate, was hosted by Janet Street-Porter, TV celebrity and Journalist.

During February and March members of the public and visitors to Harrogate were invited to nominate individuals who they thought deserved special recognition. Over 700 nominations were collected before a shortlist of 33 was chosen by judges across nine categories.

âThe awards are a fantastic event for the town and beyond. They reward not only the winners, but all those who work in every area of hospitality, recognising the effort and commitment they make on a daily basis.â

âOnce again we received a huge number of entries this year and it was great to see such a large number of the community getting involved. We have been able to reward some very worthy winners. The success of the awards in just a short space of time is also reflective in the diversity of businesses and associations getting involved, with the short list this year including not only hotels, restaurants and bars, but also a museum, an art gallery, RHS Harlow Carr Gardens, Brimham Rocks and a taxi firm amongst others.

This yearâs winners include The Mercer Art Gallery which last year was significantly refurbished and re-opened with the record breaking exhibition of Atkinson Grimshaw; Painter of the Moonlight collection. This exhibition sold over 5,000 catalogues and attracted over 36,000 visitors in a four month period with national acclaim. It was a wonderful opportunity, well executed, thoroughly enjoyed by all and attracted coverage in national media. Visitors came from all over the country and many extended their stay, supporting the local economy â it put Harrogate art on the map!

One of the most prestigious awards of the night, the Harrogate Ambassador of the Year was won by Pam Grant, President of Harrogate in Bloom. Pam and the team have had many successes promoting Harrogate as a beautiful floral town however this year they also managed to gain national media recognition with the making and showing of the BBC TV Programme "Bees, Butterflies & Blooms" which really showed Harrogate at its very best on the national television. Several repeats and many more visitors can be expected from the program - especially if Harrogate wins the Champions Award in Britain in Bloom this year!

With 12 member hotels, Destination Harrogate welcomes almost 300,000 guests each year and collectively employs over 900 members of staff. The Association has been in existence for many years with the enduring goal of promoting Harrogate as a destination, working in close partnership with the Harrogate International Centre to promote conferences and local businesses for leisure breaks. Members work together and with other tourism-led businesses in order to promote high standards within the industry and the town.

Waiter/Waitress of the Year sponsored by Sunlight Textile Services 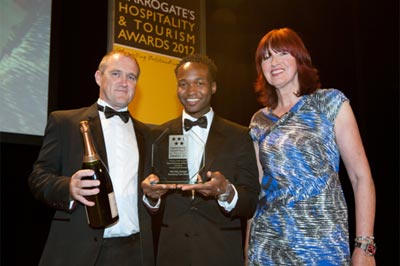 Bar Person of the Year sponsored by Harrogate Spring Water 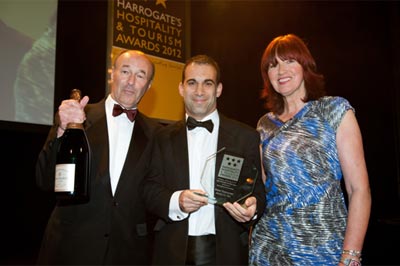 Chef of the Year sponsored by Sykes House Farm

Team of the Year sponsored by Platinum Print

Newcomer of the Year sponsored by Harrogate College 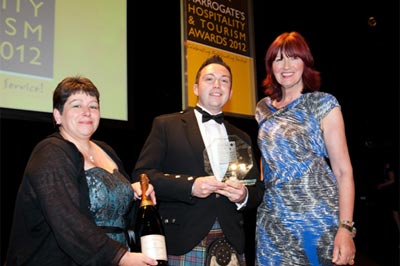 Unsung Hero of the Year sponsored by Destination Harrogate

Best Achievement of the Year sponsored by Blueline Taxis 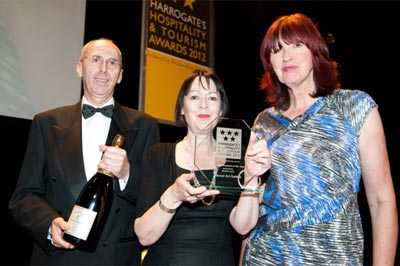 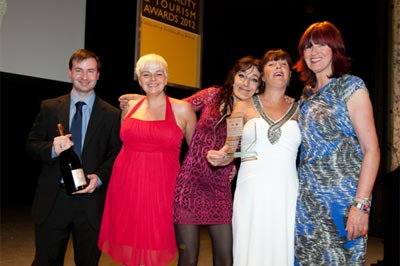