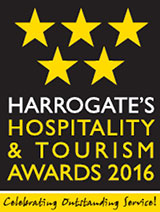 Harrogateâs hospitality heroes were rewarded for their excellence and commitment on Monday night (20th June) during a glittering gala dinner at the Harrogate International Centreâs Royal Hall.

Now in their eighth year, the sell-out awards evening, which is organised by Destination Harrogate, was hosted by Gary Verity, Chief Executive of Welcome to Yorkshire.

During February and March members of the public and visitors to Harrogate were invited to nominate individuals who they thought deserved special recognition. Over 900 nominations were collected before a shortlist of 41 was chosen by judges across nine categories.

David Ritson, Chair of Destination Harrogate and General Manager of The Old Swan Hotel, said;
âThe awards are a fantastic event for the town and beyond. They reward not only the winners, but all those who work in every area of hospitality, recognising the effort and commitment they make on a daily basis.â

He explained; âOnce again we received a huge number of entries this year and it was great to see such a large number of the community getting involved. We have been able to reward some very worthy winners. The judges were once again impressed by the level and quality of entries this year and it took a lot of deliberating to decide who would make the short list.Â  There were a lot of categories where it was really hard to have to leave out some really fantastic entries and I only hope that those who havenât made it this year to the short list will try again next year. The success of the awards in just a short space of time is also reflective in the diversity of businesses and associations getting involved, with the short list this year including not only hotels, restaurants and bars, but also a Christmas Market, a campaign to improve rail travel, Harrogate Theatre, the Turkish Baths, a florist and an artist amongst others!â

Simon Cotton, General Manager, Cedar Court Hotel and co-organiser of the event commented, âTo ensure we had the best candidates shortlisted the sponsors for the Bar person and Waiter/waitress categories visited the nominees at their place of work and spent some time to see them in action and talk to them about their jobs. In the Chef of the Year category the shortlisted chefs are now asked to prepare their signature dish for the judges to taste so we really are looking for the best of the best talent. We would like to offer special thanks to all of our award sponsors, many of whom have supported the event since its start in 2009, we could not put on such an amazing show without their support and enthusiasm.â

He added âThis yearâs entertainment was based on a popular Saturday night TV show starring two famous Geordies! And we would like to add special thanks to both my sons who helped this year, George was with the technical team on spotlight duty and Will was âMini Siâ - of course! Also to âMini Daveâ â Joe Gosling, âMini Motsonâ â BBC award winning sports commentator George Dickson and also our âcelebrity guest announcerâ, Peter Banks General Manager of Rudding Park hotel, spa and golfâ.

One of the most prestigious awards of the night, the Harrogate Ambassador of the Year was won by Stray FM Managing Director Sarah Barry. Her passionate and energetic approach to leading her team has won great plaudits from many from the district and beyond and she works tirelessly to promote the region and put the area on the map.

With 9 of the towns leading hotels as members, Destination Harrogate welcomes almost 300,000 guests each year and collectively employs over 800 members of staff. The Association has been in existence for many years with the enduring goal of promoting Harrogate as a destination, working in close partnership with the Harrogate International Centre and Yorkshire Event Centre to promote conferences, business and leisure breaks. Members work together and with other tourism-led businesses in order to promote high standards within the industry and the town.

Team of the Year â sponsored by Platinum Print