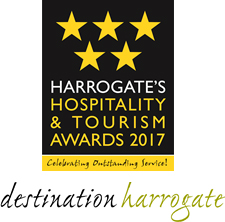 Now in their ninth year, the sell-out awards evening, which is organised by Destination Harrogate, was hosted by Gary Verity, Chief Executive of Welcome to Yorkshire.Â

The Harrogate Hospitality and Tourism Awards aim to promote the townâs hospitality offering through celebrating and rewarding those individuals who show the highest levels of commitment and strive towards excellence on the townâs behalf.Â

For a month long period during March members of the public and visitors to Harrogate were invited to nominate individuals who they thought deserved special recognition. Record entries of 1500 nominations were collected before a shortlist was chosen by judges across the eleven categories.

David Ritson, Chair of Destination Harrogate and General Manager of the Old Swan Hotel, said;Â
âThe awards are a fantastic event for the town and beyond. They reward not only the winners, but all those who are shortlisted and work in every area of hospitality, recognising the effort and commitment they make on a daily basis.â

He added; âWe received so many entries this year and it was great to see such a large number of the community getting involved. We have been able to reward some very worthy winners.Â  The nominations we receive outline the amazing feats that this industry can generate. We are extremely lucky to live and work in a town where the community comes together to make it such a great place.â

This year two new categories were added, Restaurant of the Year and Bar of the Year sponsored by Visit Harrogate and Timothy Taylorâs respectively. The winners were Norse and 10 Devonshire Place and they both received tremendous support from their customers.Â

Simon Cotton, General Manager of the Cedar Court hotel and co-organiser of the awards commented âWe would like to thank everyone who supported us in the awards, we had a record response to nominations and a record number of people attend the dinner and awards at the Royal Hall. The hospitality sector is so important to this townâs economy and it is wonderful to see the crÃ¨me de la crÃ¨me of their category being acclaimed for their efforts; both those shortlisted and those who won deserve their âmomentâ in the spotlight and it was great to see everyone celebrating tonight!â

What could be described as the most prestigious award of the night, the Harrogate Ambassador of the Year was won by John Fox. In his illustrious career John was a previous Mayor of the borough and more recently was praised for his work with Harrogate at Christmas and championing the efforts of the volunteer sector in the area. Johnâs latest project is working with Mike Proctor, President Elect of the Harrogate District Chamber to prepare a âHarrogate BIDâ (Business Investment District) to raise money from the business community to fund benefits for the town. In Johnâs words this is to âbring more people into Harrogate town centre, make them stay longer, spend more and leave happy.â

With 9 member hotels, Destination Harrogate welcomes almost 300,000 guests each year and collectively employs over 900 members of staff. The Association has been in existence for many years with the enduring goal of promoting Harrogate as a destination, working in close partnership with the Harrogate International Centre and the Yorkshire Event Centre to promote conferences and local businesses for leisure breaks. Members work together and with other tourism-led businesses in order to promote high standards within the industry and the town.Â

Team of the Year â sponsored by Platinum Print